The first lecture, hosted by the Malta Group of Professional Engineering Institutions (MGPEI), was given by mentor Antoine Guerin de Montgareuil from the French Alternative Energies and Atomic Energy Commission (CEA). He delved into the highlights on technologies developed at CEA and their potential application on insular territories. Guerin de Montgarueil also met with MCAST Energy researchers, MCAST Institute of Engineering and Transport members and Maltese stakeholders and discussed a vast rage of topics on photovoltaic integration.

During this mentoring week JUMP2Excel Modular Training on modelling photovoltaic energy production was carried out, together with a presentation of Mother PV method developed by CEA.

JUMP2Excel project has received funding from the European Union’s Horizon 2020 research and innovation programme under grant agreement No 810809. JUMP2Excel public lectures series is organised in collaboration with MGPEI and The Chamber of Engineers.

Guerin de Montgareiul has been a research engineer at CEA’s solar group since 1997. He is an expert in measurement, modelling and prediction of solar resource; the measurement and modelling of the performance of photovoltaics, modules and and systems and the sizing of energy storage for photovoltaics in smart grids.

In 1987, he started up Artificial Intelligence Research at the National Institute of Research in Computer Science and Automation (INRIA) and recently participated in a collaboration with Meteo France and French Laboratoire National d’Essaid. He also participated to the calibration of absolute cavity radiometers and of global pyranometers.

Guerin de Montgareiul has been involved in many international and national research projects and is an expert within the International Energy Agency. He is currently working in the domain of solar resource forecasting with the universities of the French overseas departments.

JUMP2Excel activities may be also open to the Maltese research community and he public, free of charge. 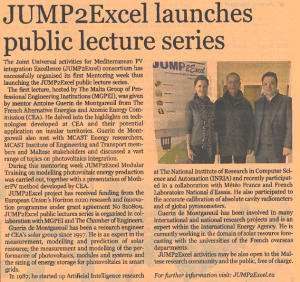